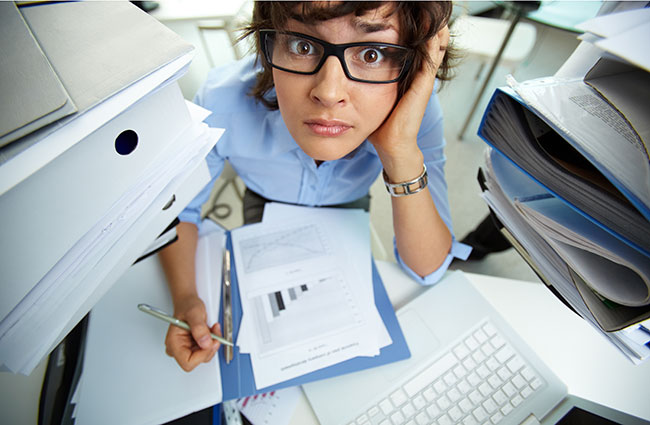 Have you ever had a boss who had some irritating foibles that drove you up the wall? Those behaviors may have even become an inside joke among employees, a peculiar turn of phrase setting off a burst of laughter among coworkers or a physical quirk you mimic at the dinner table to make your kids giggle.

As funny as those traits might be, matters turn serious when you consider the high cost of employee turnover in the workplace. Make sure you’re not driving good talent away by practicing any of the following habits.

Office Space is a comedic crash course on how not to behave as a boss, but the reason it resonates so deeply with audiences is its striking fidelity to corporate life. How many times has your organization adopted a new policy that yields little substance while only creating more busywork for employees? Whether it’s putting cover sheets on TPS reports or keeping a daily task log, it gets in the way of doing real work and drains you of motivation.

Also perfectly illustrated in Office Space are the hazards of management bloat. As Peter Gibbons notes in the above clip, “When I make a mistake, I have eight different people coming by to tell me about it. That’s my only real motivation is not to be hassled, that and the fear of losing my job. But you know, Bob, that will only make someone work just hard enough not to get fired.”

3) We Need to Talk about Your Flair

Does your company make you wear or do silly things as a cheap way of promoting their branding? Instead of living a brand based on a blend of research, reality and aspiration, they might tell you to use certain catch phrases or wear a particular color on Fridays. These infantilizing habits make you feel more like you’re at a high school pep rally than in a serious workplace.

4) Ahh, I’m Also Gonna Need You to Go Ahead and Come in on Sunday, Too

Have you had managers who spring surprises on you at the last minute and just presume you’re okay with them? Like telling—not asking—you to work on Saturday … and Sunday, and then phrasing it in such a way that you don’t have a choice in the matter. Bosses who don’t respect their team members’ personal time have overstepped their boundaries, and those who decree royal edicts rather than making requests are likely to find themselves without minions one day.

5) The Ratio of People to Cake Is Too Big

Do you have any Milton Waddams at your company? Employees thrive in an atmosphere of quality, fairness and respect, and if one or more team members feel they’re being slighted, that is a recipe for a toxic workplace. Lack of fairness doesn’t have to come from mistreatment, exclusion or bullying—it may also take the form of favoritism. If some employees feel a manager favors one of their colleagues, they will not only come to resent the manager but also to detest that colleague. In other words, if you’re going to have cake, make sure there’s an equal portion for everyone. After all, you don’t want any Miltons setting the building on fire.

Read more great tips on annoying boss habits to avoid in Six Boss Behaviors That Drive Your Team Members Bonkers and Five Meetings Your Employees Will Thank You for Killing or Fixing at The Balance.

Want to Be a Better Leader?

You may not be guilty of the above vices, but you probably have some habits you’re unaware of that may be irking your team. If you’re ready to become not only the best possible boss but the best possible you, get started with leadership coaching by calling Chris Cook at 541.601.0114 or emailing her today.