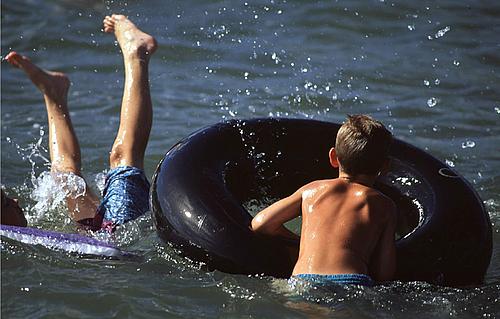 I was interested to hear that a new study is the first to identify a “happiness gene.” This meshes nicely with Sonja Lyubomirsky’s work, which says 50 percent of our happiness is genetically programmed, 40 percent is our choice and the other 10 percent is unknown.

Here’s the press release from the London School of Economics and Political Science:

People tend to be happier if they possess a more efficient version of a gene which regulates the transport of serotonin in the brain, a new study has shown.

The findings, published today in the Journal of Human Genetics, are the first to show a direct link between a specific genetic condition and a person’s happiness, as measured by their satisfaction with life.

This research led by behavioural economist Jan-Emmanuel De Neve, of the London School of Economics and Political Science (LSE), examined genetic data from more than 2,500 participants in the National Longitudinal Study of Adolescent Health (a representative population sample in the US). In particular, it looked at which functional variant of the 5-HTT gene they possess.

The 5-HTT gene, which provides the operating code for serotonin transporters in our neuron cell walls, has a variation (or allele) which can be either long or short. The long allele is more efficient, resulting in increased gene expression and thus more serotonin transporters in the cell membrane. Inheriting the gene from both parents, each of us will have a genotype which can be long-long, short-short or a combination of the two alleles.

The study compared the subject’s genetic type with their answer to the question “How satisfied are you with your life as a whole?”—to which they could give one of five possible answers: very satisfied, satisfied, dissatisfied, very dissatisfied or neither.

Jan-Emmanuel De Neve said: “It has long been suspected that this gene plays a role in mental health but this is the first study to show that it is instrumental in shaping our individual happiness levels.”

“The results of our study suggest a strong link between happiness and this functional variation in the 5-HTT gene. Of course, our well-being isn’t determined by this one gene—other genes and especially experience throughout the course of life will continue to explain the majority of variation in individual happiness. But this finding helps to explain why we each have a unique baseline level of happiness and why some people tend to be naturally happier than others, and that’s in no small part due to our individual genetic make-up.”

The paper is entitled ‘Functional polymorphism (5-HTTLPR) in the serotonin transporter gene is associated with subjective well-being: evidence from a US nationally representative sample’ and is available at the Journal of Human Genetics (http://www.nature.com/jhg/journal/vaop/ncurrent/index.html) or from the LSE Press Office or the author.

A related paper prepared by Jan-Emmanuel De Neve and co-authors Nicholas Christakis (Harvard Medical School), James H. Fowler (University of California, San Diego), and Bruno Frey (University of Zurich) further develops this research and looks at the evidence produced from a study of twin pairs. This work shows that genetics explain about one-third of the variation in human happiness. This paper is currently available as a SSRN working paper.