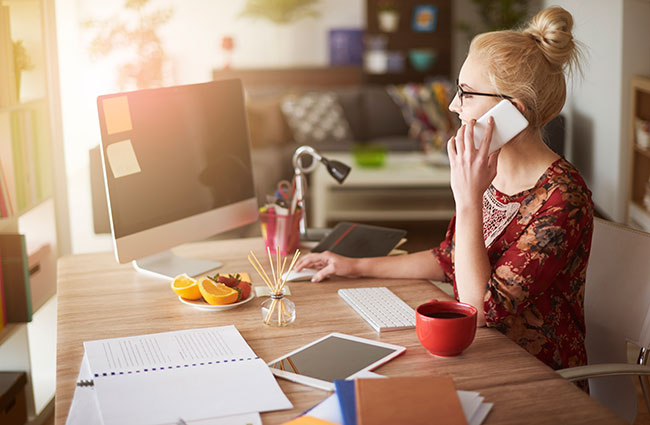 Being Self-Employed: What’s Not to Love? Plus, This 1 Tip Will Boost Your Productivity—and Happiness

It’s the life many of us daydream about while languishing in a stagnant job where our talents go untapped and unappreciated: starting our own business.

And many act on that dream—nearly a third (30%) of the American workforce comprises the self-employed and their employees (approximately 15 million in 2014) according to this Pew Research Center article.

Working at home, earning 50% more, doing what we love, using our gifts, finding a sense of purpose, calling our own shots—sounds sweet, doesn’t it?

The reality, however, may not be so rosy. That’s not to say striking out on your own doesn’t have its rewards—a lot of those perks we just mentioned are borne out by statistics.

There’s a flip side many fail to realize until they’re ensconced in their new venture: that work-life balance Americans already have trouble achieving? For most self-employed, work trounces life beginning on Day One.

If you’re thinking about becoming your own boss, be prepared to say goodbye to evenings, weekends, eight-hour workdays, sick leave, vacation time.…

American freelancers aren’t the only ones suffering from overwork. This 2016 Quarterly National Household Survey reports that Irish employees averaged 34.6 hours a week during the first quarter of 2016 as compared with 44 hours for the self-employed.

And that earlier statistic about the self-employed (specifically incorporated business owners) earning up to 50% more than their employee counterparts—it turns out 29% of that increase is due to their working more hours. Entrepreneurs may earn more on average, but that comes at the cost of time.

The Secret to Productivity

It doesn’t have to be that way, though—in fact, it shouldn’t. According to this Fast Company article, the secret to accomplishing more isn’t working more hours—it’s working fewer.

Our brains need regular breaks to recharge. When we neglect this fundamental requirement, productivity dips.

A recent Draugieum Group experiment showed those workers with the greatest productivity rates took a surprising number of breaks—for every 52 minutes of work, they took about 17 minutes off.

And we’re not talking about playing computer Solitaire or checking Facebook. The kind of breaks our brains need do not involve electronic devices—instead, try taking a brisk walk, reading a chapter in your latest book or enjoying a non–work-related chat with a colleague.

To many of us, that sounds like a lot of downtime, but our brains reward us by performing more efficiently during the time actually worked.

Here are some additional tips from Fast Company on how and why to take more breaks as well as what you may be doing wrong.

The workaholics among you probably need more hands-on assistance with reforming your work habits, and that’s where Chris Cook comes in. As a self-employed co-active coach, Chris can help you achieve your professional goals while maintaining a healthy life balance. Call her at 541.601.0114 or email chris@capiche.us to get started today.